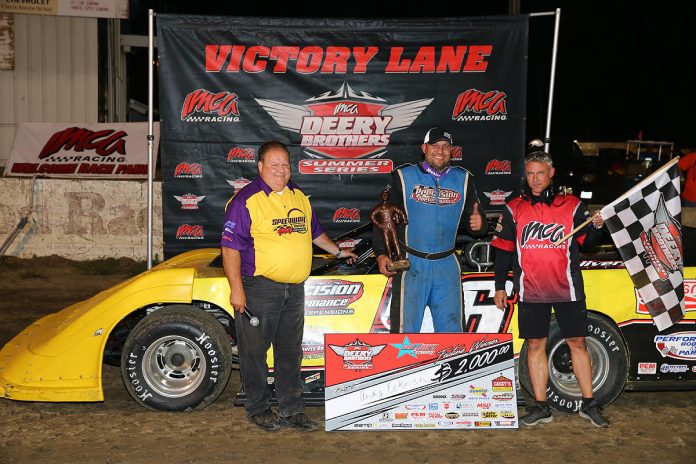 After showing off his speed in winning his IMCA Late Model tour heat race, Eckrich started fifth in the main event at West Liberty Raceway, reeled in early leader Kyle Hinrichs on the ninth circuit and stayed in front to the finish of the 35-lapper.

The $2,000 victory was the career ninth and first of the season for Eckrich, the current Deery point leader.

“It was really special,” said Eckrich, a three-time runner-up this year. “I had a lot of family and local fans who were here to see me win. It was nice to win in front of everybody.”

The caution flew four laps after Eckrich gained the point and while Hinrichs was able to gain ground in lapped traffic, he was never able to catch up.

“The top five guys have had a ton of laps at West Liberty,” noted Eckrich. “I was able to use the bottom lane to my advantage. We tried to gear the motor to the bottom and that worked for us.”

Next up on the Deery schedule is the 499th event in series history, Monday, Sept. 2 on opening night of the IMCA Speedway Motors Super Nationals fueled by Casey’s at Boone Speedway.

With the Weekly Racing Bonus included, the main event that evening will pay as much as $3,500 to win.

ABOUT US
Since 2002 Big West Racing has been your source for auto racing news in the rocky mountain region as well as the best classifieds in the west!
Contact us: webmaster@bigwestracing.com
FOLLOW US
© copyright BigWestRacing.com